Well, we'd read many of his plays in story form in Lamb's Tales from Shakespeare, which I'm now re-reading with my 8yo son, but this was our first 'real' play in full Shakespeare language.

Here's a list of the Lamb's tales we read over the first three years (YR1 - YR3) in AO:

We keep track on note cards or a legal pad as we read because the plot and characters always twist and turn and disguise themselves and use different names. I'm sure my silly sketches will forever be tied to Shakespeare in their minds. (And yes, that says UK! It should say England, I know, but apparently quickness overrides correctness when I'm reading Shakespeare!) 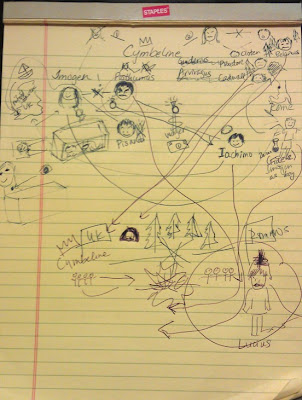 Additionally, in YR3, Term 2 we read Bard of Avon: The Story of William Shakespeare by Peter Vennema and Diane Stanley, a fun picture book which talks about the kinds of plays he wrote, the Globe, Queen Elizabeth's love of plays, how we really don't know what his exact name is, and many more interesting things including a surprising list of common phrases and words we owe to his pen like "tongue-tied" and "lie low" and "green-eyed jealousy" and "without rhyme or reason" and "eyesore".

With all this, my daughter loved Shakespeare heading into the full language version and looked forward to the readings - she didn't know any better. AO recommends one play per term, we took two since it was our first and this was a play that was completely unfamiliar to us.

Additionally, before beginning, I talked to her about just reading through these without any expectation other than that we would grow familiar with the sound of his language and read through to the end regardless of what we 'get' or don't 'get'. There would be no narration, although we did talk about our readings afterwards. This took the pressure off and allowed us just to be spectators for a while. I also knew it would get difficult at points so this set the stage for pressing through; there would be no quitting Shakespeare.

We read about two or three scenes per week and for the first three weeks or so, she picked characters and read their parts, stumblingly. After that, I read all the parts with her following along in her book.

They giggled through the gift of tennis balls and we talked about that possibly being some kind of novelty at the time (the blind leading the blind here!).

My 8yo son, who listens in to my daughter's readings, had fun with me on a nature day at that time, following the idea of the French ambassadors he sent the second youngest Johnson boy over to me to demand his lunch! So I sent him back with threats that if he didn't come and get his lunch himself, he would have none! It was fun.

I worked on my French pronunciation which is always fun :)

We had tears one day when she complained that she had no idea what was happening, so I reminded her what we said about just growing to know his language. I read through to the end of the scene while I cuddled her in my best "I know it's hard sometimes but we'll get through this" way.

We laughed out loud at the exchange between Pistol, the French Soldier and the poor boy trying to translate.

We read the St. Crispin's Day speech, which I told them was famous, I don't know how I knew that... she didn't respond in awe, as I'd secretly hoped - she probably won't even remember it - and that's okay, because all we're doing for now is working towards understanding a language. These things take time. And if someday she needs to know it, she can Google it in two seconds like I did!

They giggled at Fluellen's P's - his b's are p's! And listened attentively as they wanted to hear it again. We didn't know if it was intentional or maybe something with the language back then? Nonetheless, it made for fun. And I always think leaving these 'unknowns' gives them something fun to discover someday for themselves if they care to.

At the end, my daughter asked about 'Kate' "Does she love him Mommy?"

And that led to a short discussion on reasons for marriage and what it meant to be a noble woman. She may have loved him or not, I didn't know I told her. To which she replied "I think she was agreeing to it, it seemed like she was okay with it at the end."

Is that what all we we're supposed to get from King Henry V? Are we doing it all wrong? I really don't know! I'm sure many experts out there would find it laughable the hack job I'm doing with it. But it doesn't matter, because I have no expectations other than to read Shakespeare with my kids. After all, most 2nd and 4th grade kids aren't reading it at all, what have we to lose with our feeble attempts?

I look forward to being able to read these together, each taking our own parts as the kids' reading improves. Apparently my husband enjoys Shakespeare too so maybe he'll join in the mix, his Canadian French would be an improvement over mine.